In 2010 Kathy picked up more awards at the Gallup Inter-Tribal All Indian Ceremonial, including a First Place and Best of Category.  At the Indian Market, her work is always sought-after by collectors, as she is one of the few Navajo weavers using silk and alpaca in addition to traditional Churro yarn.

For the Navajos weaving is an inherited occupation.  Traditionally little girls learn it from their grandmothers, or in Kathy’s case, from her own mother, who learned it from generations before.  Kathy Marianito is a true descendant of master weavers.

Her lineage doesn’t come any better, because her great-great-grandmother Juanita was considered one of the finest blanket weavers in the 1870s and 1880s.  Juanita’s husband, Manuelito, was one of the most prominent leaders of the Navajo people.”  It was Manuelito, Kathy’s great-great-grandfather, who was instrumental in negotiating the Navajos release from Fort Sumner and Bosque Redondo in 1868, returning to their homeland, the only displaced tribe allowed back on their true native soil.

Kathy grew up hearing about her famous ancestor, as well as tales of “The Long Walk,” The excruciating walk to exile, and then their triumphant return.  Growing up on the reservation in New Mexico, she also watched her mother weave. “When I was really young, maybe 8 or 9, I stole her yarn.  I would put it on the fence and would ‘weave’ it there, until my grandfather found out and told my mother.” 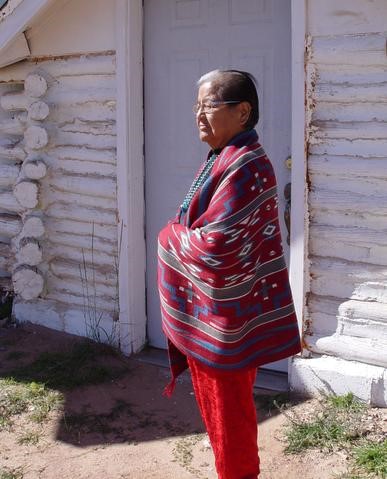 Her mother finally taught Kathy how to set up a real loom and weave…lessons which at first did not come easy to the rather headstrong little girl. “When I really started, it was difficult.  She told me to put it up on my own, and that was rough, but she just kept telling me to do this and that, and fix this and that…‘You have to learn it, so you know next time to do it better.’”

“I used to make six of them in the summertime, and I used to take them to the trading post and buy my shoes, my clothes, that I needed to take back to school.  When I go to boarding school, we don’t come home for two year!”

Kathy never forgot her mother’s words about how these lessons on the loom would stay with her, so she would always have her own income. “I never forgot how to weave or to do things my own! My very own hands, my designs… that’s how I got started.”

There were other lessons too, such as how to wash the sheep's wool, and then dry and card it, spinning and dying it different colors using plants such as sage for green, sunflowers for yellow or green tumbleweeds for black wool. “We tried everything,” she says with a laugh.

When she was 15, however, lessons such as these came to an abrupt end.  That’s when she was told she was about to be married to a man she didn’t really know.  “That was tradition,” she says. “But I don’t want to get married at 15 years old.. got a lot of dreams and all that.. didn’t have time to hand around and be a wife.  So.. I took off.

The teenager rode her horse to the trading post, taking with her some clothes and what money she had, and boarded a bus for Salt Lake City.  And so her new life began, learning firsthand about the world outside the reservation, educating herself and becoming a seamstress.  She moved to California and had her own apartment, with only occasional visits home. “I’d come back to the reservation, but it was lonely because I was a city girl now!”

Years later, during one of those visits, her mother told her she missed her and asked her to stay.  Kathy did, but returned to the reservation with purpose. “I got a job as a health representative.  I used to visit homes and take care of people in the community, working with the doctors, the policemen, the lawyers, and I’d talk to the people.  I’d almost lost my language, but that’s how it started.  Then I went back to weaving, to help my mother and to finish her weavings.” 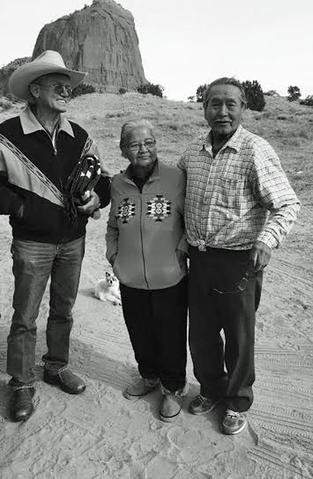 Part of her job was working with alcoholics going through detox and she discovered helping people learn different crafts also helped them learn different habits. “I taught grandmothers, young girls… I’d teach them to sew, quilt, how to design them, even how to make tools for weaving.”

Along the way Kathy met Lorenzo Marianito, a Navajo medicine man who also came from a family of weavers.  This time she did not run away, and their marriage has remained strong, like her weavings.  Her eyes still sparkle when she looks at him, and there’s a definite twinkle when she watches her grandson Sean, who often is by her side as she weaves.

Steve Getzwiller came into her life in 1998, after hearing about Kathy’s weaving skills.  That’s when she was making rugs.  Not anymore.  Since then the two have continued to raise Navajo weaving to the next level, being the first to use silk as a fiber in traditional designs, and the only ones incorporating alpaca into “wearable art.”  You can find Kathy’s rugs at www.navajorug.com 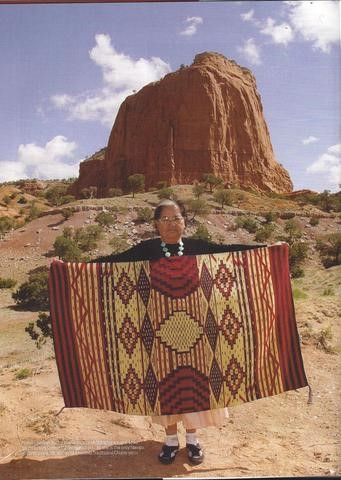